Broadcasting history was made today when Channel 4 broadcast the first episode of the first documentary series produced by a Romani journalist (me!). I’ve spent the last 2 years producing this series and spent the summer of 2021 out on the road getting the inside view of the impact a lack of Gypsy site provision has on Britain’s 300,000 strong Gypsy and Traveller community. The series also highlights the impact the proposed Police Bill will have on nomadic life in Britain. Viewers in the UK can watch the whole series online here:

The series is a tale of two halves. The first episode looks at the problem of homelessness amongst the very few of us that are still nomadic, the second episode looks at Appleby Fa`ir, site provision and fighting back against the Police Bill. A TV reviewer writing in the Daily Telegraph, the house newspaper of the governing Conservative Party, concluded: “60 Days with the Gypsies: a far cry from Big Fat Gypsy Weddings, thankfully.” You can read that review here:”

A powerful new film from Romany journalist and film maker Jake Bowers, backed by the NHS in Surrey, is encouraging Gypsy, Roma, Traveller and Showmen to give COVID the jab and get vaccinated. A moving new film created in partnership with a Romani boxing gym and Britain’s top fairground artist has been released to encourage all Gypsy, Roma, Traveller and Showmen to get vaccinated against the Coronavirus.

Made earlier this month, the film weaves together the boxing and acting talents of the Pinewood Starr Amateur Boxing Club with the artwork of Showman artist George Hebborn who has created a mural to the community members affected by the pandemic. The mural provided a backdrop to an on-site vaccination clinic where community members queued up to get the vaccination.

“Lets face it this has been one of the most terrifying and sorrowful years of our lives,” says Jake in the film. “The coronavirus, has turned everyone’s lives on their head. So I’m off to find out what I can personally do to get life back to normal.” In the film he speaks to National Chaplain to Gypsies and Travelllers Father Dan Mason, and Gypsy and Traveller NHS Nurse Lisa Gavin to get the moral view and scientific facts about the vaccine. In it they powerfully tackle many of the myths about the vaccine while a Romany boxer fights a character representing COVID in the ring.

Much of the film was created in the boxing club run by the Romany boxing trainer Les Stevens. Les sadly was one of the first Romany victims of the virus. Les’s son Les and his grandson Les also feature in the film. All the people involved, from the NHS to the church and the community members involved are asking community members to get vaccinated and share the 1 minute version of film on their social media accounts with the hashtag #givecovidthejab

For that past three months I’ve been writing and directing this beautiful animation for the European Roma Rights Centre. It’s been a real pleasure to work with award-winning animator Sarah Gomes Harris to make this cautionary tale about Romani kids being taken into state care simply because their parents are Roma and poor.

For the past couple of months I’ve been working as the main producer on the 2nd series of the Channel 4 series 60 days on the Streets. The original series in 2019 exposed the national scandal of homelessness from the inside by following explorer Ed Stafford as he took to the streets of London, Manchester and Glasgow for 60 days. The next series will explore the hostile environment Britain’s Gypsy, Roma and Traveller communities live in as the Tory government introduces a new wave of anti-Gypsy laws. We are currently looking for people to take part.

It’s not often you get the chance to remake one of the world’s most iconic music videos. But a while back I worked alongside director Harry Hall to remake George Michael’s Freedom 90 music video for a younger audience. Commissioned by Sony Music it features a cast of survivors that have overcome everything from bullying, life-changing injury and childhood neglect to homophobia and transphobia. Unlike the original video which featured the super models of it’s day, this one features true superheroes. It’s just been released to celebrate the 30th anniversary of Freedom 90.

Here For Good celebrates the work of public service workers who are working in partnership with Roma migrant communities to improve integration in the East of England. From Peterborough to Luton and Ipswich this film reveals the work of schools, charities and Roma families determined to stay here for good. Commissioned by the East of England Local Government Association. Funded by the UK government Department of Communities and Local Government.

In the autumn of 2019, as Britain seemed utterly divided on the impact of having voted for Brexit, I travelled to the East Anglian town of Wisbech to see how the impact of mass migration from Eastern Europe had transformed a community.

Nick-named Wisbechistan by some locals this film explores how those who pick and process our food sometimes encounter the ancient but enduring problem of human slavery. Commissioned by the Rosmini Centre, funded by the UK government Department for Communities and Local Government.

Check out the latest Party Election Broadcast I’ve produced for the Labour Party, broadcast on BBC1 and ITV last night. Much of it shot in my home town of Hastings, but also in Plymouth, Yorkshire and Brixton. 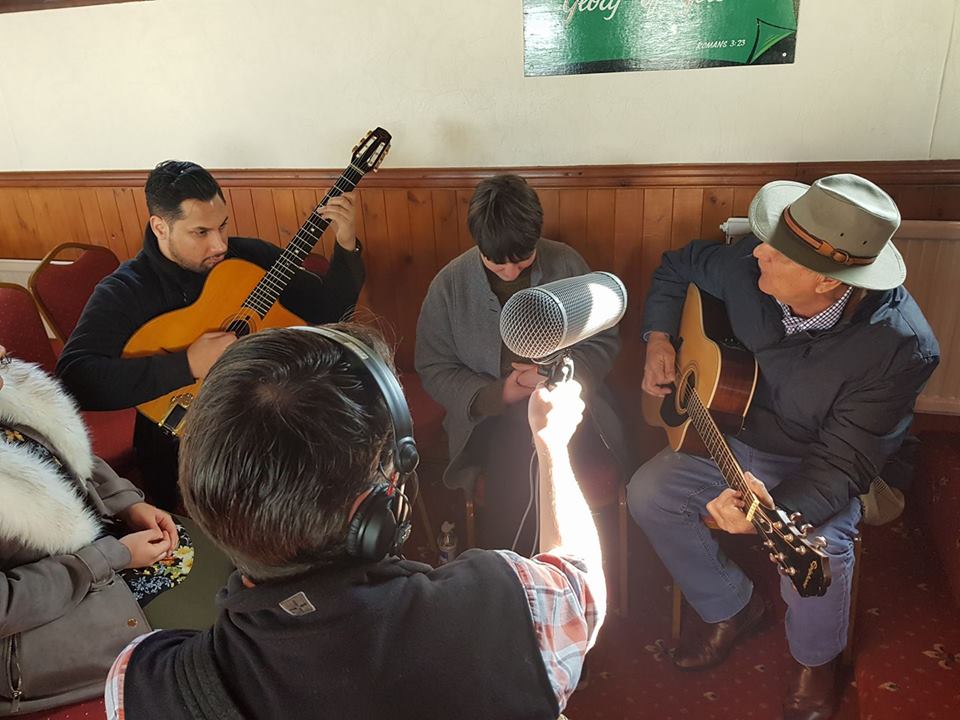 Here’s a 10 minute programme I produced earlier this week for BBC Radio 3 about Romany language and song broadcast earlier today. Its all fascinating but the bit I produced starts 36 minutes in.
Featuring the amazing music of Romany Diamonds Ben and Cindy Czureja doing “Kaj O Bergi o Versha” (Where are the mountains and woods) and the the legend Ambrose Cooper singing “All through me rakli kicking up a guggeli”